Below you will find a brief history of Faith Lutheran. For more details please look at the 50th Anniversary booklet published in 1987 for a detailed account up to that time.

Faith Lutheran was founded by Rev. M.H. Tietjen and 16 families in 1937. The first location for Faith Lutheran was on the corner of Van Buren and Magnolia streets. Services were conducted on the second floor. The building still exists today and many of our members pass by every Sunday on their way to Church! 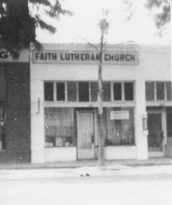 Membership during these early years increased slowly but it did increase. By 1942 Faith Lutheran was able to apply to the District for a loan to lease a dedicated facility. One of the conditions of this loan was that Faith officially incorporate within the then named English District of the LCMS. Through this loan, Faith Lutheran leased a store front and converted it to a regular Church, dedicating the site in April 1943. During this time the growing membership was temporarily capped when weekly attendance reached 72! In 1944 property was purchased at Van Buren and Hayes streets and a parsonage was erected with the intention of building a new Church on the site. Unfortunately Pastor Tietjen, founder of Faith Lutheran resigned in December of 1945 and many members of the congregation left to follow the Pastor.

Following the war and failed attempts to build a new church at the Van Buren site, Faith Lutheran was given the US Army Chapel on the former site of  Camp Anza which had served as a staging area and prisoner of war camp during WWII. After the decommissioning of the camp, it was decided that the area would be developed for housing. The idea was to move the Chapel from its location on the base to the Van Buren site a short distance away, however the building proved to large and difficult to move and the streets too narrow. It was then that the group of private investors whom had acquired the land from the US Army, decided to gift the land the Chapel resided on to Faith Lutheran if the congregation agreed to leave the Chapel in place. Dedication and the first service at the new Chapel occurred on December 14, 1947. For several months, members had to show specially issued ID cards at the base entrance when arriving for Sunday service! For more interesting information about Camp Anza click here.

By 1955, Faith Lutheran had become a self supporting Church and continued to grow. The 25th anniversary celebration on November 4, 1962, coincided with the ground breaking ceremony for a new sanctuary at the current property on Jackson Street.

Check out the images, a discussion is coming soon.

Bulletin from the dedication of the new Church.

See the new 75th Anniversary History from the commemorative Directory!

Please click on the images below to learn about former Pastors of Faith Lutheran Church. This history is a work in progress. If you have any pictures, history or other information you would like to share please email us or stop by the Church office. More to come!